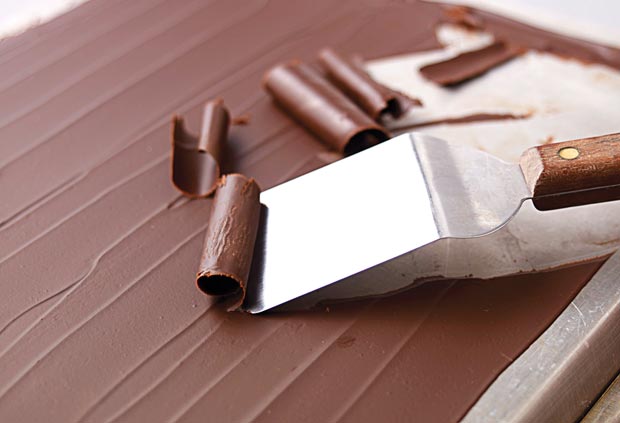 Bloom
The characteristically grey film that forms on the outside of solid chocolate. This occurs when chocolate is stored at temperatures higher than 25°C and is caused when the cocoa butter begins to melt and rise to the surface. It does not affect the flavour but has an unappealing appearance.

Chocolate Extract
Often used in recipes to replace chocolate in an attempt to cut back on calories or fat. It is a concentrated natural chocolate flavouring.

Chocolate Liquor
This is the thick, dark brown liquid that results from pressing roasted cocoa beans. It is the true chocolate "essence".

Cocoa Bean
The fruit of the cacao tree that is harvested to make chocolate. The inner nib is used to produce chocolate liquor.

Cocoa Butter
A vegetable fat found in the inner nib of the cocoa bean. Its distinctive melting quality is what gives chocolate its unique texture.

Cocoa Powder
The dried portion of the nib of the cocoa bean that is left after the liquor has been extracted. There are two types of powder: a milder Dutch processed product or a more bitter, dark version.

Frosting
Also called icing, this is a sugar-based mixture used to coat or fill cakes and pastries. It can be cooked or uncooked and range from thick to thin. It is thin enough to spread, but thick enough to adhere to the item being coated. It does not always contain chocolate, but of course the best ones do.

Ganache
A thin, rich coating made with chocolate and cream that is heated, cooled slightly and poured over a cake. When it cools, it becomes a hard shell.

Seize
A term used when melted chocolate becomes lumpy and stiff. It occurs when too much liquid comes into contact with chocolate during heating or when the chocolate itself is overheated.

Tempering
This is a technique of stabilizing chocolate through a melting and cooling process. A similar effect can now be obtained using a partial melting method in the microwave.