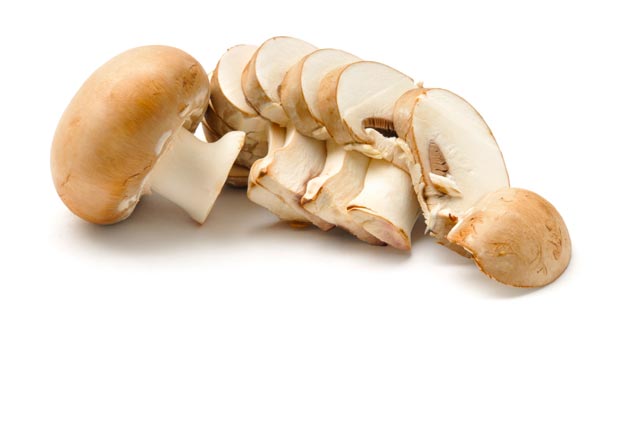 Today's mushrooms come in a wide variety of flavours and textures, so experimentation is limited only by the imagination. We'll show you a few basic characteristics so you can get cooking with the many delicious varieties.

It's small and white with a dome-shaped cap and mild flavour that intensifies when cooked. Look for firm mushrooms with a tightly closed cap.

Named after its shell-like shape, the oyster mushroom has a mild flavour and velvety texture. The colour ranges from light brown to grey. Look for tender heads with no dried edges. The oyster mushroom is particularly fragile. Best cooked until just heated thru to preserve silken texture.

Ranging in colour from caramel to dark brown, the shiitake has a broad, parasol-shaped cap and a soft, spongy texture. Its rich, woodsy flavour has made it a staple in Asian cooking. Use cooked or raw but always discard stem, which is tough and stringy.

The crimini has a hearty, earthy flavour and a colour that varies from tan to dark brown. Choose criminis with dry, smooth caps. Interchangeable with button mushrooms.

These large, firm, pancake-shaped mushrooms with dark-brown caps and black exposed gills have a rich, earthy flavour and meaty texture. The thick, tough stems-and sometimes the gills-are removed and discarded before cooking. Portobellos are usually grilled or roasted and served whole or sliced often as a beef substitute in sandwiches and stir-fries.