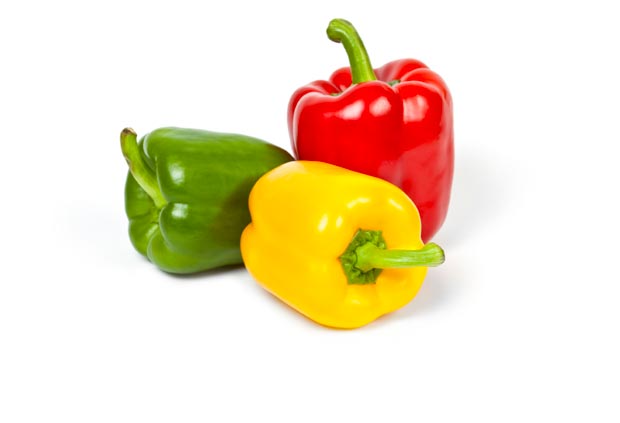 With hundreds of varieties to choose from, peppers are the perfect produce for cooking. You can use these delicious accompaniments to sweeten your meal or turn up the heat. All peppers, from sweet to smouldering, are part of the same family. They are indigenous to South America, but are now grown and used all around the world. Here are some Kraft Kitchens pepper pointers on selection, storage and preparation so you, too, can enjoy them.

They're measured in multiples of 100, beginning with bell peppers, which register 0 to 100, and ending with habanero peppers, which can have more than 300,000 units.

0 to 100 Scoville units.* The most commonly used pepper is green, waxy and bell-shaped. When the green pepper is allowed to ripen on the vine, it turns various shades of yellow-green to bright red and becomes sweeter. Its mild flavour makes it a tasty addition to salads and stuffing.

0 to 100 Scoville units. These are green peppers that have been left to ripen on the vine. They're plump and sweet, with the red variety boasting the sweetest flavour. They're often used for roasting and stir-frying, but also add colour and taste to other dishes.

0 to 100 Scoville units. Cubanelle peppers are usually yellow to pale green (red varieties are simply ripe yellow ones) and look like elongated bell peppers. Also called Italian frying peppers, cubanelles are sweet and tender. They're often baked with the stem and seeds intact, as they contain most of the sweet taste.

1,000 to 1,500 Scoville units. Among the mildest of all chillies, poblano peppers are heart-shaped and blackish-green in colour. With their thick, tough skin, poblanos are best when charred, steamed and peeled. They are great for stuffing with any mixture.

2,500 to 5,000 Scoville units. One of the most popular chillies, these cone-shaped peppers can be green or red, and measure two inches in length. They're smooth-skinned, thick-fleshed and range from hot to very hot. Jalapeños are commonly used in salsas or as a meat accompaniment.

30,000 to 50,000 Scoville units. These pungent peppers are also known as finger chillies for their unique shape. Finely chopped fresh cayenne heats up sauces and stews in a flash. It's also commonly dried and ground into red pepper.

80,000 to 300,000 Scoville units. Don't let their small size fool you — Thai chillies really turn up the heat. Available in green and ripe red, they are often used in Asian cooking and add spice to stir-fries. But be careful: their intense heat lingers.

300,000 or more Scoville units. One of the hottest peppers in the world, these one to two-inch spicy numbers range in colour from green to orange to yellow to white. They are usually reserved to make hot sauces and very spicy salsas.